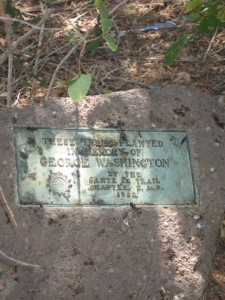 While the City of Trinidad was trimming trees in 2009, they found this marker and contacted the Santa Fe Trail Chapter, NSDAR. The marker had been placed in 1932. It was placed in an area of trees planted in memory of George Washington. The chapter had disbanded in 1982 and re-organized in 2003. Since that time, the chapter has planted a Douglas fir tree near the marker.

Located in Kit Carson Park in Trinidad, Colorado, this marker is inscribed on the east and west sides with historical facts. The other two sides have the insignia of the NSDAR and the Colorado state seal. This marker was dedicated on March 2, 1910.

The content contained herein does not necessarily represent the position of the NSDAR. Hyperlinks to other sites are not the responsibility of the NSDAR, the state organizations, or individual DAR chapters. Membership inquiries can be made using our Contact Us form. This website was last updated on October 1, 2021, by the webmaster. Unless noted, photos courtesy of chapter members.